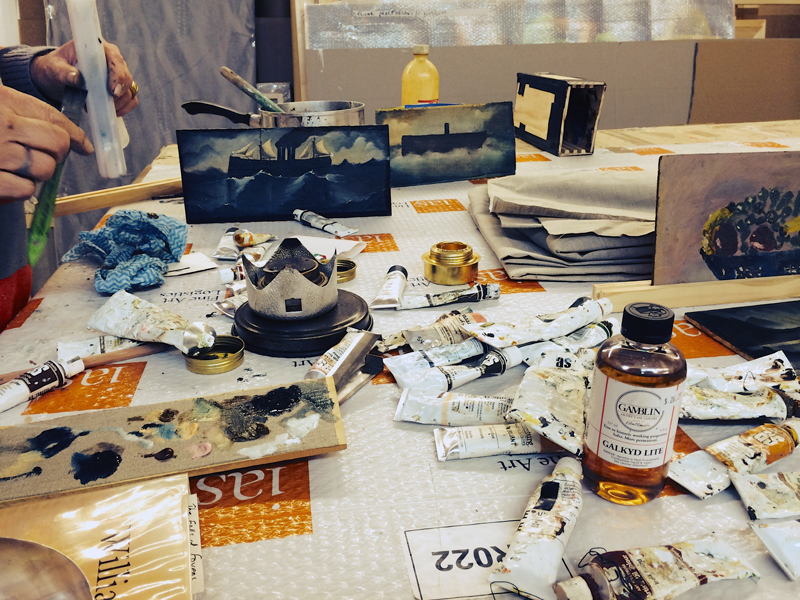 Eddy always paints ships and boats. He has been painting the same thing for 30 years, every time it works out differently. This takes away the problem of choosing a subject, and frees him up to enjoy the process.

Eddy uses off cuts of Huon pine as the support for his work. It’s a sustainable, recycled product. Eddy spoke about it as an ancient wood – the pieces he was using could be 1000 years old. The boards are cut to around 14cm x 40cm with unprimed linen glued on to it. It was pretty fun when he mixed up rabbit skin glue and heated it up in a saucepan over a tiny camping stove. He loves the alchemy of the rabbit skin glue over the huon pine, how the wood starts to glow with one application. The wood may flex a bit, but if you just keep calm it will come back. Apply a coat of heated rabbit skin glue to the panel, then lay a piece of linen down over the glue, and put another layer of glue over the top. Good quality linen works better than cheap, found stuff. The piece of linen is cut just a little smaller than the panel, so you are starting with a one centimetre wooden border on all sides. This acts as a frame for the image you are going to paint.

Once the glue is dry, sand the linen down lightly, until it’s silky. The surface will affect the colour, tone and atmosphere of the painting. Eddy feels that this process of gluing fabric to a board creates a meaningful object with its own presence, before you’ve even started the painting

Eddy uses the golden mean to create a composition. Putting in the horizon either above or below the exact middle makes a dynamic composition. Paint in a blocky shape for the main body of the ship. Put the funnels wherever it suits the composition best, rather than where they would necessarily be in real life. He always starts with earth colours, so later on any other colour you use looks really bright. You can make a black out of indigo and burnt umber that really looks black against the earth colours. He uses another board prepared in the same way with linen for a palette, that way he can see exactly how the colours will look on the painting. He also mixes colours on the canvas and uses his fingers a lot. If you’re nervous at this point that’s good. Start making mistakes – build on them. It sounds clichéd but it will start talking to you. Use the same brush for light and dark –this gives you the struggle you need at this point. He wipes it all off a little bit at a time. Adds a bit, wipes off another bit. It gives a very evocative, smudgy look. “I never stick to what you’re supposed to do, and I never have”.

Eddy also likes to add text about the ship or the place he’s painted. He either paints on the front with a fine brush, or writes in poker work on the back. He likes the idea of making the painting more than an image, it becomes a source of information, a reference work. 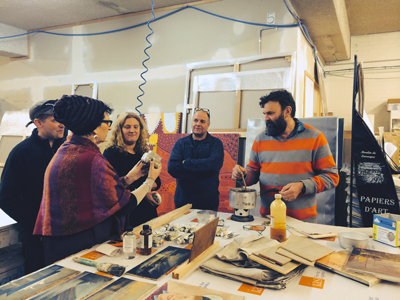 Click here to find out more about our art materials